It’s nearly Spring so it is time to add a few yellows and blues to the birthday card palette.

I used Snapdragon’s Snippets Sunflower card from the Silhouette Online Store as the base design element.  As designed, it is a super fun card, but I wanted to add a little more texture and pattern to the card.  The first step was to scale the entire (grouped) file to 8.0″ inches tall.  While setting up the file for cutting, I also added a circle for my sentiment and sized it to fit the center of the flaps cut.  I moved it off of the cutting mat, and saved it until I was ready to make the sentiment using the Print and Cut feature.

This card is designed with a right and left flap and right and left petals (they are not symmetrical).  I cut the center base flaps twice.  To make sure the same patterned paper was on the inside of the flaps, I horizontally flipped one of the base flaps before cutting. 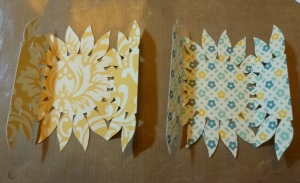 I also wanted a little extra dimension to the petals and I cut two petal sets as well.

Cut the stem and leaves and adhere to the background patterned paper.

Before adding the sunflower to the card, use a Crop-A-Dile to set a grommet in the brown centers for the ribbon tie.  Cut a 18″ piece of ribbon and run it through the grommets.  Align the ends. 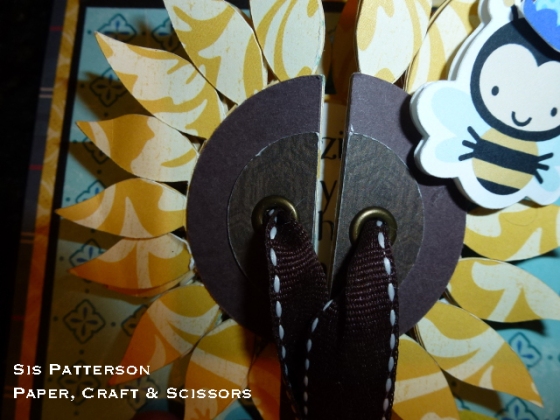 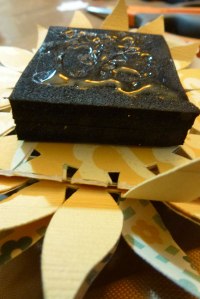 To complete the card front, I print and cut two small bees from Lettering Delights Kawaii Kalendar.  I also cut and print a little birthday party hat and used foam dots to attach the hat and the bee to the flower.  I like to combine all of the print and cut elements on one sheet of paper to print and cut at the same time.  So I also included added a sentiment to the circle I sized to fit the sunflower and made two larger bees for the inside of the card.

I adhered the sentiment directly on top of the ribbon running through the grommets.  The ribbon is not glued into the interior of the card.

After adding a few more layers of paper to the front of the card, I adhered it to my 5.25″ square card base from Papertrey Ink’s  fabulous cardstock.  The interior of the card includes more patterned paper, a label in the “sunflower” patterned paper, a Penny Black Stamps sentiment, and the double layered (with foam dots) bee and her party hat.

Of course, she will be headed out in the Lori Whitlock mailer (best 99 cent investment ever).