I’ve been working on a wedding shower shadowbox this weekend, and realized an anniversary was approaching quickly for my friend Karen.

Karen loves lizards – in fact – she even had one or two on her bridal veil (pink, I think – faux, I am sure).  The couple are holding a heart from their wedding “fiesta” invite which preceded their wedding several states away. 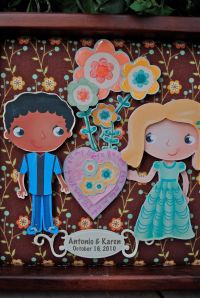 The Cricut Imagine Cuts are from Best Friends – his figure originally had pig tails which were trimmed, and he got a more masculine figure through the use of a purchased “soccer shirt.”  Overall, I still like it.  Almost a year later.  An accomplishment.

I should be wrapping up with the latest shadowbox soon.  It is a whole new palette to me – blue.   And I hope to get the rose bush tutorial done soon as well.

In the meantime – here are Karen and Antonio from October 2010.